In the 75th edition of the Hero Santosh Trophy 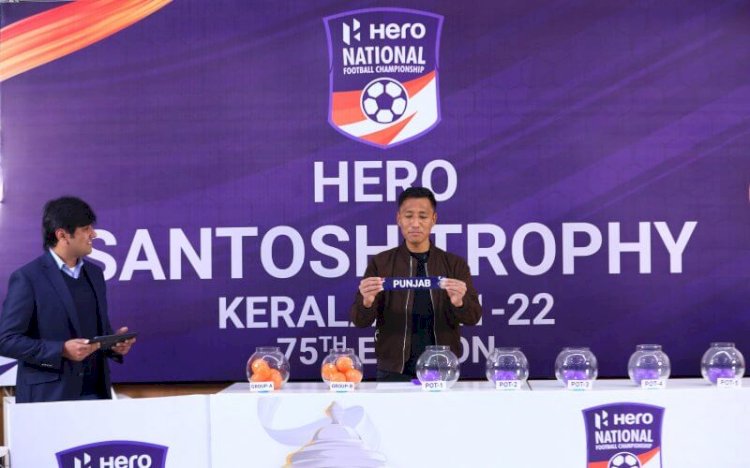 NEW DELHI: Title contenders and former champions Punjab, West Bengal and Kerala have been clubbed in Group A for the 75th edition of the Hero Santosh Trophy to be held in Kerala from February 20.

The official draw for the Platinum Jubilee edition of the country’s premier football tournament was held today with former defender Gouramangi Singh assisting in the process.

Group A could easily be classified as a ‘Group of Death’ with the likes of Bengal, Kerala and Punjab going head-to-head along with Meghalaya and surprise package Rajasthan

Ten teams who came through the qualifiers were drawn into two groups of five each for the main event which will “I was very pleased to know that the Hero Santosh Trophy would be taking place in Kerala as it is a footballing state,” said Gouramangi. “It is a great initiative by the AIFF and Kerala Government and I wish the players all the best.”

Group B sees defending champions Services paired alongside Manipur, Karnataka, Odisha and Gujarat, the latter qualifying at the expense of powerhouses Goa.

The 75th edition of the Trophy will be inaugurated by the competition’s two most successful sides – West Bengal (32-time winners) and Punjab (8).

Hosts Kerala open their campaign against Rajasthan who pipped Maharashtra by a point in the West Zone qualifiers.

Services begin the defence of their title against a Manipur side which knocked out Mizoram in qualifying. Karnataka, who came through with a perfect record, will be hoping to build further momentum in their opening game against Odisha.

The top two teams from each group will qualify for the semi-finals.

Maharashtra starts campaign with a win