In the semifinals, 2015 runners up Uttar Pradesh Hockey pipped 2011 runners up Hockey Karnataka 2-1, while five-time finalists Hockey Punjab led by a brace of goals by Rupinder Pal Singh put aside Hockey Maharashtra 3-0 to make their sixth final.

Hockey Maharashtra began on a dominating note forcing three penalty corners but found the Hockey Punjab goalkeeper Kamalbir Singh standing in the way, including one from Pratap Shinde which was close.

At the other end, Hockey Punjab had their share of exchanges and forced two penalty corners. Up stepped Olympian Rupinder Pal Singh who found Hockey Maharashtra goalkeeper Akash Chikte read his low drive to the right and stop the first, but then a variation from Rupinder (28th) who pushed uppishly resulted in a 1-0.

On the changeover, Hockey Punjab had Sudarshan Singh (39th) push home from close to make it 2-0. Seven minutes later, Hockey Punjab was awarded a penalty stroke which Rupinder (46th) scored with a neat push.

Earlier, in the first semifinal, Uttar Pradesh Hockey was off to a quick start scoring inside the first five minutes when Mohd Amir Khan (4th) deflection from close caught the Hockey Karnataka goalkeeper Somanna Sharath K.P off guard.

Hockey Karnataka had hardly settled down but found themselves 0-2 in arrears when Vishal Singh (8th) sounded the boards off a penalty corner.

Hockey Karnataka who pushed for the equaliser did well but did not manage to make the breakthrough.

It was not until mid-way into the second quarter that Mohd. Raheel (22nd) gave the South side the much-needed goal. The goal came off a penalty stroke which came off the first penalty corner they forced.

At the end of the first half, Uttar Pradesh Hockey led 1-0 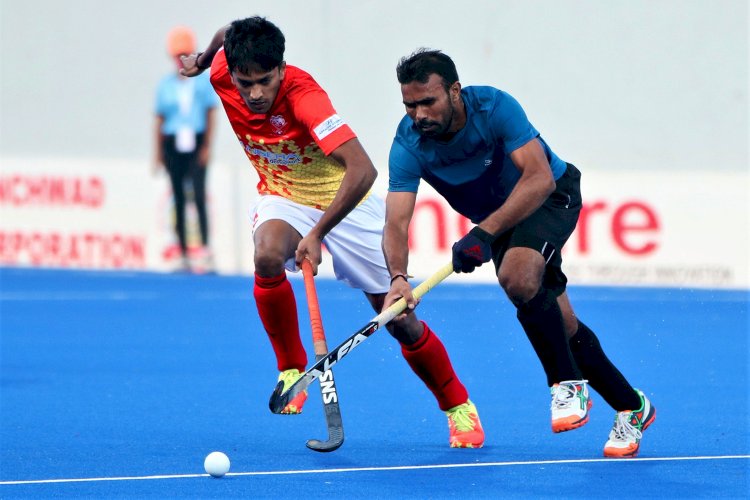 Uttar Pradesh Hockey skipper Vivek said, “so far we have taken one game at a time and that’s played well with us. We want to extend this momentum into the final. I must single out our goalkeeper (Ayush Dwivedi) who stood like a rock and gave us confidence.”

On the final, he said, “we would like to complete our journey in Pune with the gold, something that Uttar Pradesh Hockey fell short of by losing the summit clash back then.”

Maharashtra, Bengal, UP, TN into QF