‘Reala Nippon’ has become the first official fan club of La Real in Asia. ‘Real Bojador’ Sociedad, has also been established in the Western Sahara region, with a stated aim to promote football and its values 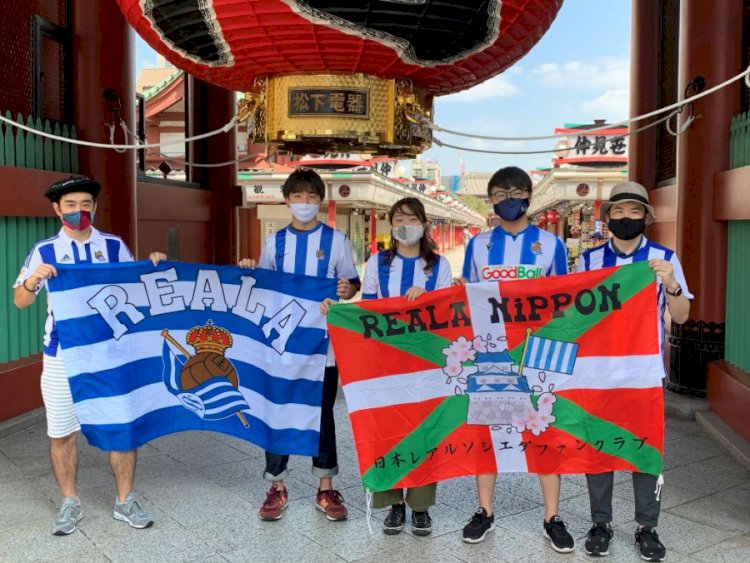 After an outstanding start to the LaLiga Santander season, on the back of a very strong 2019/20 campaign, Real Sociedad is growing in stature not just in Spain, but around the world.

The team is being closely followed in Japan, where the first official fan club in Asia has recently been created, as well as in the Western Sahara region of North West Africa.

In addition to other fan clubs that are already operational, in cities such as London, Rio de Janeiro or Montevideo, this underlines the fact that on-the-pitch success can bring new international growth for the Basque club.

Recommendation from a rival

'Reala Nippon' is a fan club made up of young people from Tokyo and Yokohama. The story of the club starts with the organisation’s president, Mio Ortiz, who, like some of her colleagues, recently had the opportunity to live in San Sebastián, where Real Sociedad is based.

After watching and meeting with the team, her passion for La Real was secured. But the formation of the fan club itself comes from an unlikely source in one of the club’s eternal rivals.

“Our president was inspired by a friend of hers, who is the president of the Athletic Club supporters club in Japan,” explained the club secretary Hikaru Yoshinaka. “She recommended that she create a Real Sociedad fan club in Japan which is what prompted her to get in contact with the club.”

"Football has gained popularity in Japan since the J-League was founded in 1992,” Yoshinaka added. “The popularity of LaLiga has increased particularly in recent years due to the addition of some top Japanese players to the Spanish competition.”

“Most fans of Japanese football know LaLiga,” the club secretary continued. “More and more people watch LaLiga matches, meaning that most LaLiga Santander teams have their official Twitter account in Japanese. This makes it much easier for us to find out more about them.”

Given that this is the first fan club for Real Sociedad in Asia, it is a move that is expected to strengthen ties with other LaLiga fan clubs and build a larger Spanish football community in the country. "We will work together with fan clubs such as Real Madrid and FC Barcelona, which are also popular here," Yoshinaka said.

The club is currently in an enviable situation occupying the top positions in LaLiga Santander, which provides added interest in following the team. One of the added attractions for realistic fans in Japan is the signing of David Silva. "Silva is very popular in Japan," Yoshinaka noted.

After the health situation has made global travel more possible, the fan club aims to return to San Sebastian and advises other football fans to do the same. "We will visit the club in Spain and join the events organized by LaLiga in Japan," Yoshinaka claimed. “We think there is a passion that the fans have which needs to be experienced. Nothing is comparable to watching a match at the Reale Arena."

More recent still is the fan club that has established itself in Wilaya, in the province of Bojador in Africa’s Western Sahara region. The mission of ‘Real Bojador Sociedad’ goes beyond just supporting the club, as it also has aims to generate wider interest in playing sport and football in particular.

In addition to following the news and the matches of the club, the Ministry and the Saharawi Federation have promoted the new club as a place to meet and enjoy football.

The Basque Country, in particular San Sebastián, has a long tradition of welcoming young Sahrawi people during the holiday season. Through an initiative supported by the San Sebastian city council among others, vulnerable children can escape the harsh summer conditions and spend some weeks living with local families in Spain. Through extending this with a local fan club, the values and team aspirit of football can be strengthened further.

Life in a bio-bubble: Stage set for unique Hero I-League season to kick off

How Athletic Club is strengthening its social and environmental...

LaLiga partners with M88 in Asia for four years