Greg Stewart was chosen as the first choice by 14 of 16 experts, thus giving him a landslide victory 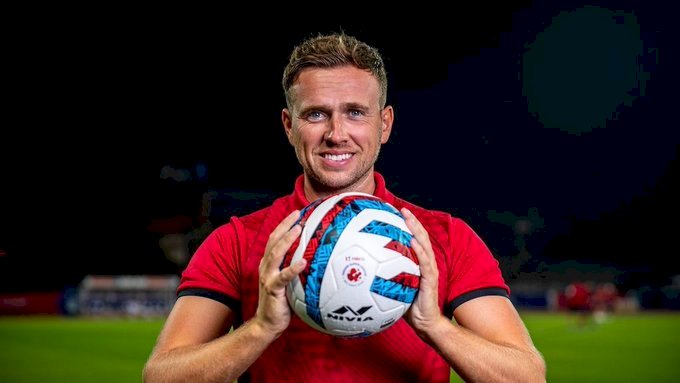 MARGAO: Following a nerve-wracking 120 minutes of football, Hyderabad FC lifted the Hero ISL 2021-22 trophy by virtue of penalties after the match was tied at 1-1, in front of an energetic crowd at the PJN Stadium in Margao, Goa on Sunday.

With fans back to where they belong after a two-year hibernation, the occasion was slated for greatness even before the ball was kicked. Kerala Blasters FC fans, known for their reputation, outnumbered their rivals in attendance as well as the decibel level.

A 68th-minute goal from home-bred talent Rahul KP put the Yellow Army ahead, sending across the signal to get the party started - from Goa to Kochi, along the west coast. However, Hyderabad FC, a team that has been so clinical this season, turned the tide around from the jaws of defeat to fabricate the club’s greatest evening.

The season which saw plenty of uncertain results finally came to a fitting end. No one would have backed Manuel Marquez’s men to lift the trophy when the tourney kicked-off in November, last year.

We have also been treated to some sensational individual performances throughout the season. Few might not have claimed the preferred results, but, they have lit the grand stage for sure.

HERO OF THE LEAGUE

No second thoughts. The Scotsman pulled off one of the best campaigns by an individual in the history of the Hero ISL. Stewart, the heart and soul of Jamshedpur FC’s campaign, was directly involved in 20 (10 strikes and 10 assists) out of the 43 registered by the Men of Steel this season. In addition to that, he produced 61 shots and 73 crosses, with an average of over 40 passes per match throughout the season.

The all-round footballer who bamboozled through the defence at his will to go for glory or weaved the same for his teammates to get the job done, has been the instrumental figure in their League Winners’ Shield Triumph. Slipping out on a season double was tragic, but, there’s a lot to look forward from the footballer’s perspective - the AFC Champions League for starters.

Voting: A total of 16 experts voted for their first, second and third place choices for the Hero of the League award. Greg Stewart was chosen as the first choice by 14 of them, thus giving him a landslide victory.

Bartholomew Ogbeche and Peter Hartley was the first choice for one two experts. The others also in the contention for the award were - Liston Colaco, Adrian Luna, Joni Kauko and Alvaro Vazquez.

Kerala Blasters FC have had a near-perfect outing in the Hero ISL 2021-22, just missing the silverware by a whisker. Gill, the young custodian should be given a lot of credit for his team remaining in prominence till the grand finale. The custodian has kept seven clean sheets this season, the most by any player. The Blasters have collected full points in each of the above-mentioned games.

To put in numbers, the youngster has made 47 saves this season, with a save percentage of almost 70%. Despite his heroic effort, his season ended with a defeat, with the gloveman outclassed by his counterpart in an enthralling penalty shootout. Football can be harsh at times!

The striker had already sent ripples across the league in the previous three seasons, but was up for a different challenge this time around. Roped in by a team with little to cheer about till then and not so financially viable like other heavyweights, his task was cut out. The occasion was set for him to light up, and he produced fireworks out of it.

In the 22 matches played this season, the striker netted 18 times, thus equalling Ferran Corominhas’ record of most goals in a single Hero ISL season. His goal-scoring spree made Hyderabad FC a force to reckon with, keeping them at the pinnacle for the most part of the season. The two-time Hero ISL winner will now have some continental action to deal with, now that the domestic championship has been ticked-off for his side.

EMERGING PLAYER OF THE SEASON

Bengaluru FC uncharacteristically did not get over the line this season, but, a certain Naorem Roshan Singh has hogged the limelight despite the fact. Having played 17 matches this season, the side-back has provided seven assists, the most by an Indian and third-highest overall in the season. The youngster, who also scored a goal, was phenomenal in the defensive duties as well, with 77 tackles, 27 interceptions, 40 clearances and 37 blocks to highlight his memorable campaign. Just 23, Roshan is already a mainstay in the starting XI, earning a national call-up, with greater heights to achieve at the end of the horizon.

Voting: 16 experts voted as per their choice, with Naorem Roshan Singh picked as the best by seven of them. Six experts elected Prabhsukhan Gill for the award, while Liston Colaco was given a preference by two experts, while the remaining one felt Ruivah Hormipam was the deserving winner for the award.

ISL: Fans to be allowed for finals